“All these little decisions, these everyday things I surrender, these choices I make daily will one day shine in glory. They will all count.” -Vaneetha Risner.

These were the first three words that popped up in my brain the first time my Mom brought up seeing a vascular surgeon at UVA. She had done her research & figured out (quite wisely) this was definitely the best next step for me. I, however, only heard the word “surgeon” & couldn’t figure out why in God’s holy name I needed to see one. Because clearly my issues weren’t the kind where drastic surgical measures needed to be taken…we could just get me some medication or change my diet or something. But I didn’t need surgery.

……& now here we are one year later & I’m preparing for my second major surgery. Ironic, isn’t it?

Yeah….I don’t know what I was thinking. 😛

But more than feeling dubious, I think I was becoming downright weary. At this time, I’d been sick for seven months, & with all the doctor visits, bloodwork, hospital visits, testing, & procedures, I’d only gotten one solid diagnosis. To top it all off, I’d been told I would almost certainly be back to normal after removing my tube, & I was not. We had just gotten home from my last speech & debate qualifier & I was confused, discouraged, emotionally exhausted, & skeptical.

I told my Mom I thought going to another specialist would be a waste of time, energy, & money. We’d checked in with my pediatric gastro specialist & he was skeptical anything was really wrong. We’d accidentally wasted a month in the wrong department (we needed vascular, not cardiology) & after wearing that heart monitor for a month, nothing ultra concerning was found. Deep down I knew I was sick & was going to need to figure out a new plan of action at some point…but my brain just wasn’t there at that time.

You see, I was feeling crazy. & not the fun, sugar high, 2am hyper crazy either. 😉 I was doubting if I really had something wrong or if I was just going mentally insane. Because maybe I’d just gotten used to feeling sick all the time. Maybe I was just pathetically lazy deep down inside. Maybe since no-one could find anything, nothing was actually wrong & this was all in my head. I think all the, “you’re just stressed” lectures, normal test results, & “birth control will heal you” talks just really went to my head & stayed there. Satan can really be oh so convincing when he whispers his lies in your ears…there’s a reason he’s called the king of deceit.

But oh my word, my pain was intense. Over the course of eight weeks, it had spread into my spine, lower back, thighs, left side, ribs, & pelvic region in addition to my right side, epigastric, & head. I also still had very low energy levels & while I was doing a better job eating, it remained an overall struggle. Despite this, I still tried as hard as I possibly could to continue “real life” in typical Grace fashion. But as always, these activities came with very harsh consequences that would land me in the bed in tears with excruciating pain. It was then I realized that my mind was so willing, but my body was so unable, & when I realized that, I instantly felt less crazy.

My Mom did a great job sitting me down & explaining why I should seriously consider seeing Dr. Cherry. In the end, she sold me, & we booked an appointment. After all, if I didn’t like him, I didn’t have to go back. 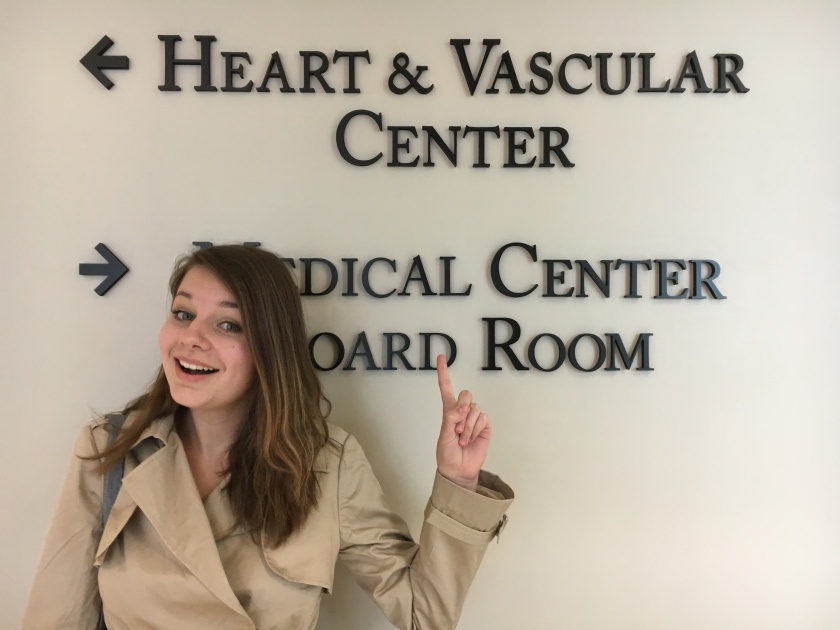 On April 12th 2017, Mom & I made our umpteenth trip to the UVA vascular clinic. First, I had what’s called a “Vascular Duplex Exam,” which is “a non-invasive evaluation of blood flow through your arteries and veins. This test provides information to help your vascular surgeon make a sound diagnosis and outline a treatment plan.” Mom & I knew something was up when they impromptu called in a professional running a study on a rare disorder called, “Nutcracker Syndrome,” & asked her to take a look at my test. Shortly after that, she whisked Mom & I down the hall to a newer, high technology machine to check me out further. I heard bits & pieces of the nurses/radiologists conversation…”do you see that?”….”yes, there’s the compression”….but no one would actually confirm they’d found anything.

Next we headed to the clinic. Before meeting Dr. Cherry, I met with two NPs. They were both extremely kind & I instantly liked them. Mom & I felt much more at ease in the vascular department than previous ones. While I didn’t know it then, they would become two of my favorite medical peeps ever. We went over my entire health history in addition to my current symptoms. For the first time in my medical career, they didn’t make me feel crazy.

Then they began to address my vascular duplex exam results. & that was the day I was diagnosed with Nutcracker Syndrome. Nutcracker Syndrome is, “a vascular compression disorder and refers to the compression of the left renal vein (the vein that carries blood purified by the left kidney) between the superior mesenteric artery (SMA) and aorta.” They explained to me that they could select a random group of people off the street & 40% would probably have a slight compression. However, most people have very mild, practically nonexistent cases & don’t experience any symptoms at all. I, however, am in the rare minority. My case of NCS is very severe. Because of the severity of the compression, my blood flow has been compromised which makes the it very weak. Often when it can’t go where it’s supposed to go, the blood finds alternate routes, causing spinal congestion, midline congestion, & pelvic congestion in addition to causing my chronic pain + other symptoms.

Dr. Cherry came in & said his next recommended step was a gastro emptying study to make sure my organs were still functioning properly with the compromised blood-flow & that I didn’t have any gastroparesis (a condition that affects the stomach muscles and prevents proper stomach emptying) from being malnourished/unable to eat for so long. After the study, I would meet with them again to review the results & discuss my treatment options.

Believe it or not, my first emotion was immense relief. I know that probably sounds very weird that I was relieved about having another rare disorder, but I saw it as legit confirmation I wasn’t crazy. I did have a very serious problem going on in my body that was causing these issues & they had actually found it. I felt like I had been holding my breath for a very long time & I could finally let it out. Obviously, as time went on, these feelings would change & become more mixed, but for right now I was okay. I wasn’t crazy. & that’s what mattered to me in that moment.

But I would soon find out.

This is a text widget. The Text Widget allows you to add text or HTML to your sidebar. You can use a text widget to display text, links, images, HTML, or a combination of these. Edit them in the Widget section of the Customizer.
%d bloggers like this: